The Fort Hays State University Art Department and Moss-Thorns gallery is located on the first floor of Rarick Hall on the northeast edge of the FHSU campus. The gallery is named for two former chairs of the Department of Art at Fort Hays State University - Joel C. Moss and John C. Thorns, Jr.
In 1953 when the Art Department moved into the new Davis Hall, they had an area dubbed the Lounge Gallery outside a classroom they used for exhibitions. For many years during the 60's and 70's, the Department of Art was spread among several buildings on campus and never really had a formal gallery. In 1969, John C. Thorns, Jr. first presented his vision to the college administration for a regional art museum with educational laboratories to house the Art Department. After years of planning, a new facility for the department was realized with the completion of Rarick Hall in the spring of 1981. By this time, the Art Department faculty had grown from three members to eleven full time and one part time faculty. When it first opened, the gallery was called the Visual Arts Center Gallery. It was rededicated the Moss-Thorns Gallery of Art on October 11, 1987 during the annual homecoming activities. The gallery was renamed for Joel C. Moss (who was Chair of the Department of Art from 1946 to 1973) and John C. Thorns, Jr. (who was Chair from 1973 to 1990). 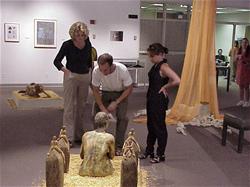 Student and faculty exhibits, as well as traveling exhibits, are presented on a regular basis. The gallery changes shows throughout the year. They include: faculty exhibitions, MFA thesis exhibitions, traveling exhibits, student exhibits, print collections and various other student works. The gallery also participates in the annual gallery walks with opening receptions for new art exhibits during the spring, summer, fall and winter gallery walks.